I have been looking at Jennifer McGuire's blog here. She has been doing lots of card with a watercolor technique. I love her cards and wanted to try it too. I looked through my dies and thought that this dragonfly might be a good one to try it on. The first card was not done with any cardstock behind the watercolored papers and I thought that after I made it, that the 2nd card I would make would need that. The dragonfly was cut out and colored with water color markers and then sprayed with water. After that dried, I used stickles and let that dry then glued it back into the background. The background was inked with ink pads and water color markers. My markers left streaks which I did not like. I guess I will need the new distress markers if I want it to look as pretty as Jennifer's cards. I did not do the Happy Birthday with cardstock behind it at first but after doing my 2nd card, I changed that. I did not put the black on the dragonfly with a sharpie at first but again, after my 2nd card, I decided to do the black after the card was finished and I like it better. It was just too pale without it.

This is my second card and it is done with chalks and then sprayed with a sealer so that the chalks will not rub off. I put several colors of blue on the background and then rubbed it with the wet paper towel that I used for the first card. After I cut out the dragonfly, I embossed it and then colored it with a black sharpie and then the chalks and stickles. I put several colors of cardstock behind the background and I like that and the chalks better. It is not as messy and easier to do also.

This card will be used for a card swap for my online art group, An Affair With Art (AAWA). 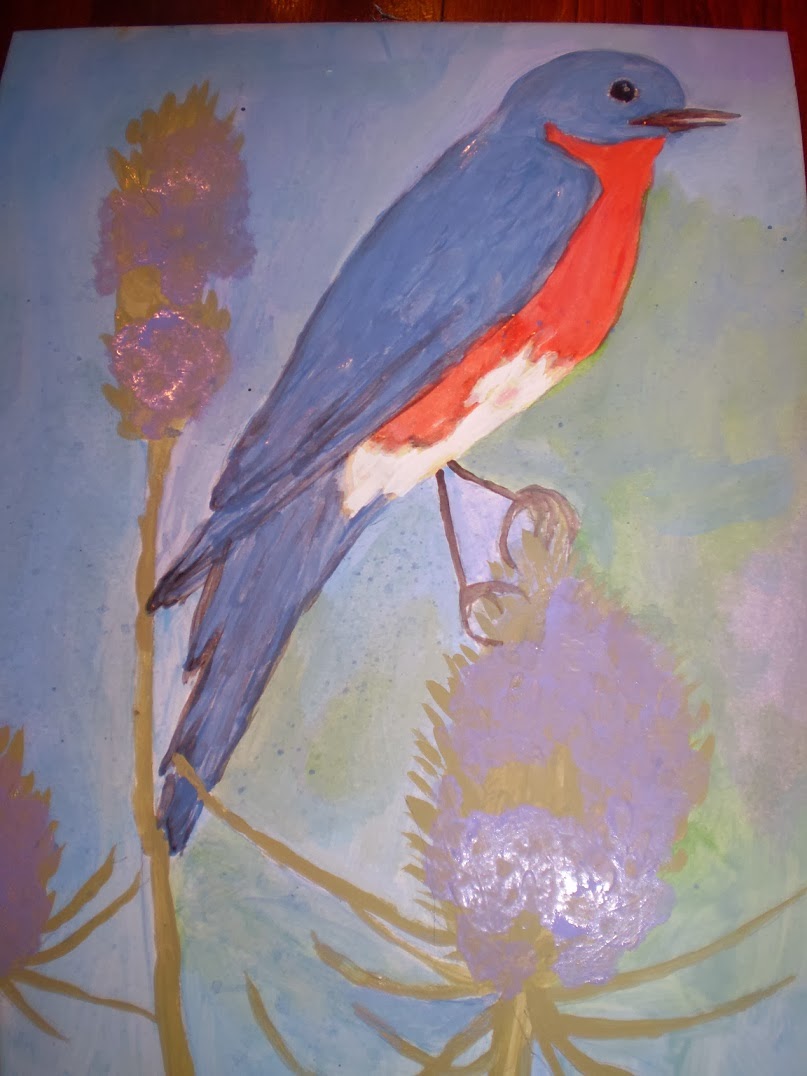 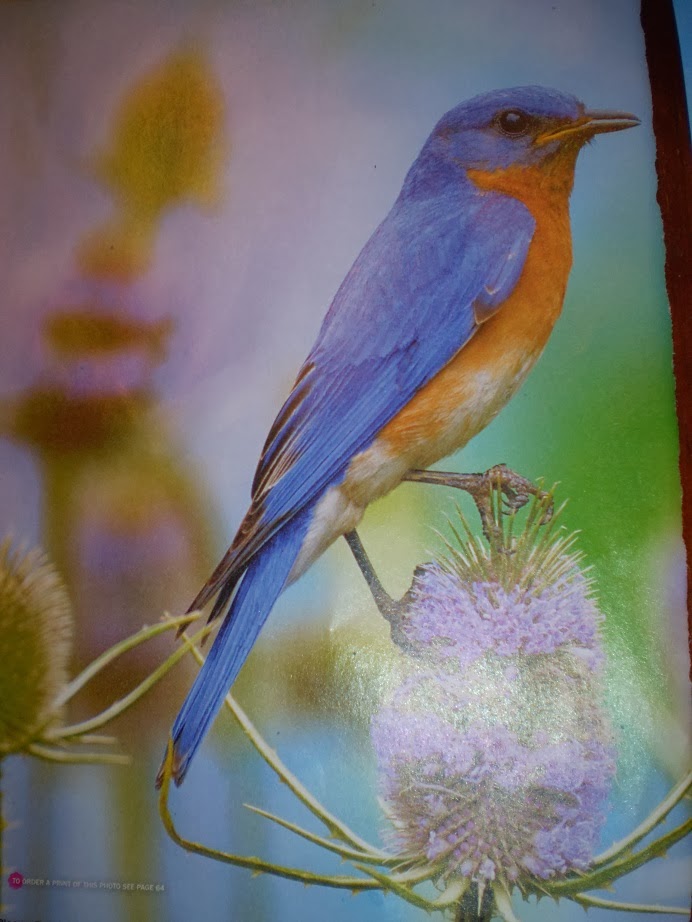 I felt that I just had to do some art today for my sanity! With cold weather coming back soon and some other stressful things going on in my life, art is the most relaxing thing that I do. This one is a bluebird and we have lots of them here. I expect to see them as soon as warmer weather truly arrives. They are usually all over my pastures fighting for prime nesting boxes. I really look forward to seeing them again. The flower looks a little like thistle to me and that is one thing we do not want in our pastures. Thistles will just take over a pasture if you don't carefully get rid of them. I know they are beautiful but I had just as soon not see them here except maybe in my paintings. The magazine picture below my painting is what inspired my painting.
Posted by Nancy B at 4:15 PM 7 comments:

What a difference a week makes! 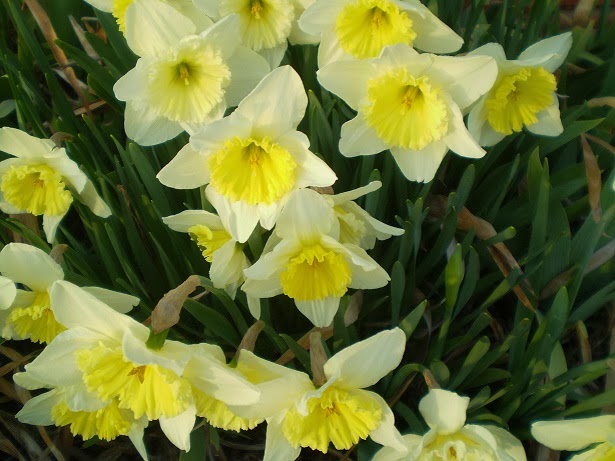 What a difference a week makes from lots of snow to lots of warmer weather here in SC! The daffies are coming up and they always remind me that Spring cannot be far away.  This makes me want to do some Spring art with bluebirds or daffies. Hopefully I will have more time next week in my craft room than I had last week. The weather has varied this past week from the 50s to the high 70s!
Posted by Nancy B at 4:08 PM 1 comment:

More snow with ice under that

Here is how it looks this morning with more snow on top
of at least an hour of hard sleeting last night! You cannot even see the road!
I hope we thaw out soon. There will be no getting out in the car with this stuff!

Fun in the Snow 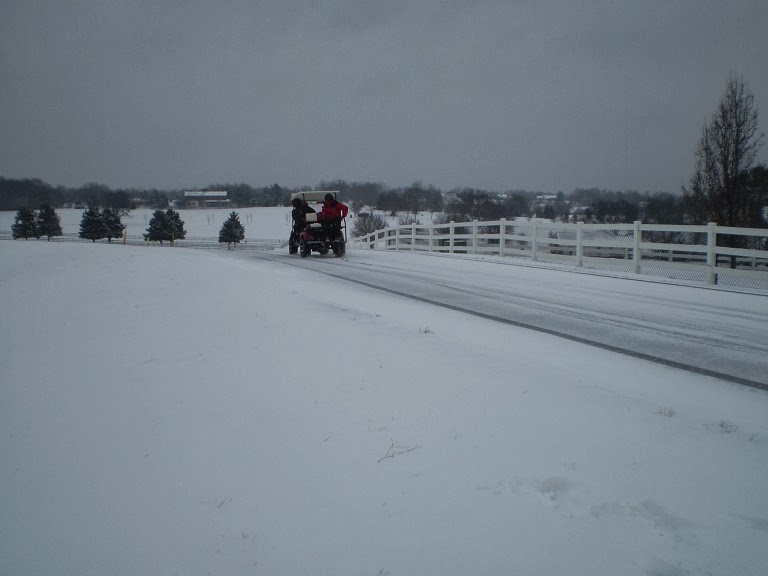 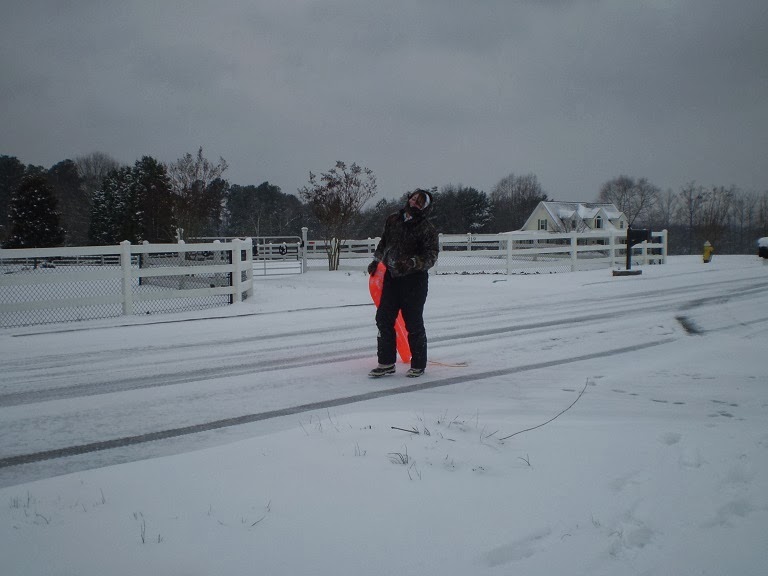 This is how my hubby and my neighbors had fun in the snow today.  You can see the roads are much icier today than they were yesterday and right now it is snowing and sleeting and it is supposed to continue that into tomorrow! We are just making the best of it and hoping all this ice doesn't cause a power outage. 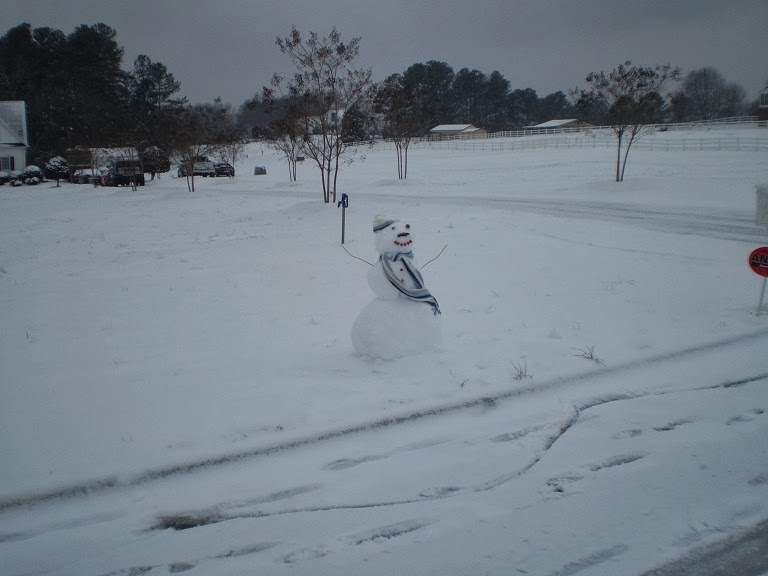 The snow is Back! 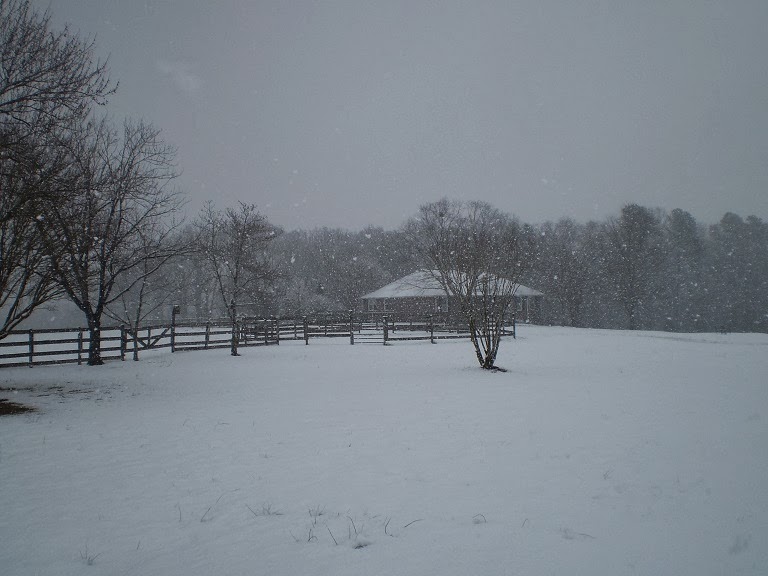 It's rare in South Carolina for us to get a lot of snow but this one will probably be the exception. We already have 4 inches of snow and we are predicted to have a foot of snow by tomorrow and then it is supposed to be covered in ice! Yikes! Sure is pretty though, isn't it? It looks like we live in  snowglobe. 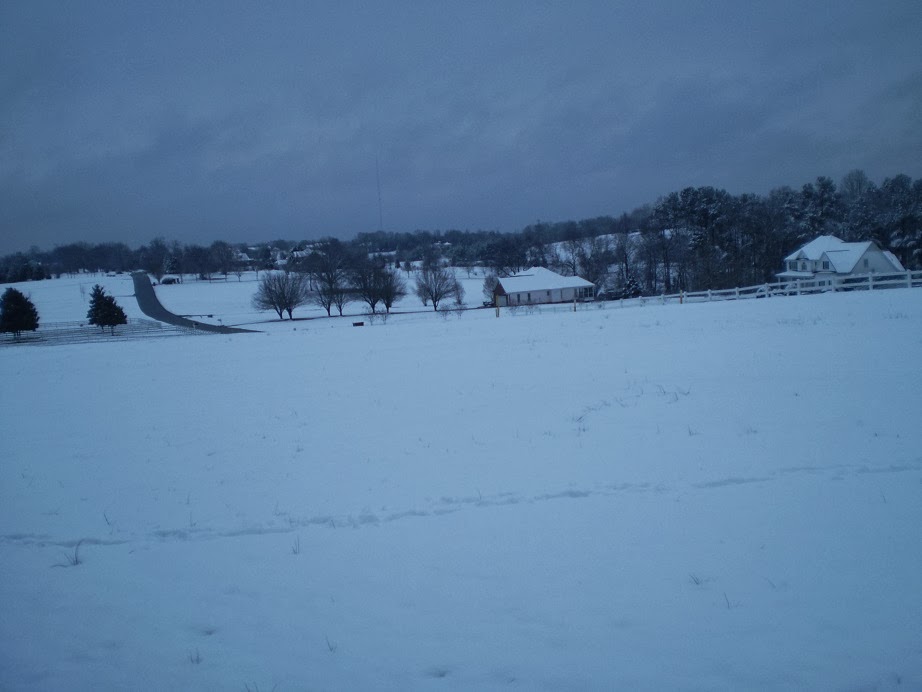 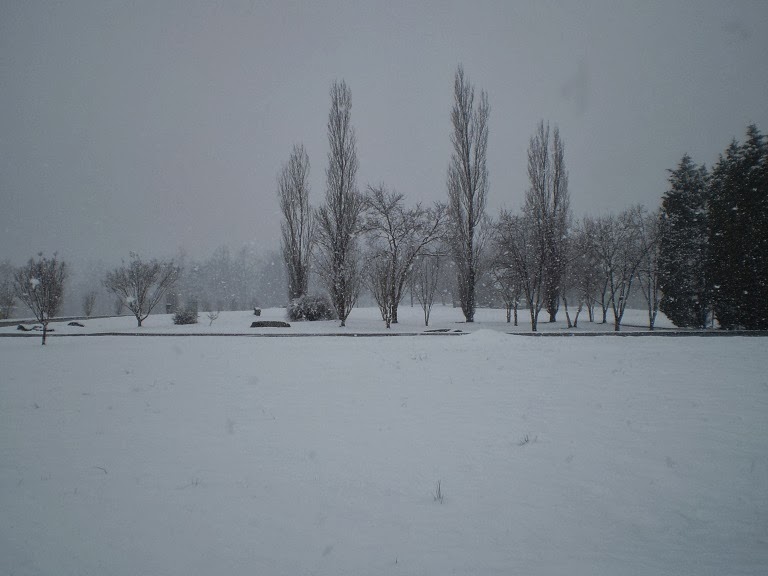 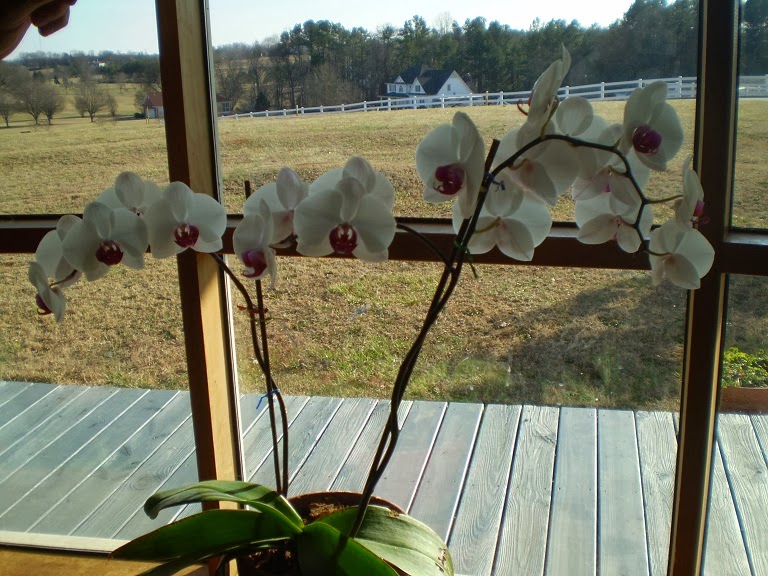 My orchid is in full bloom now. 20 of these beautiful blooms! What a happy day! 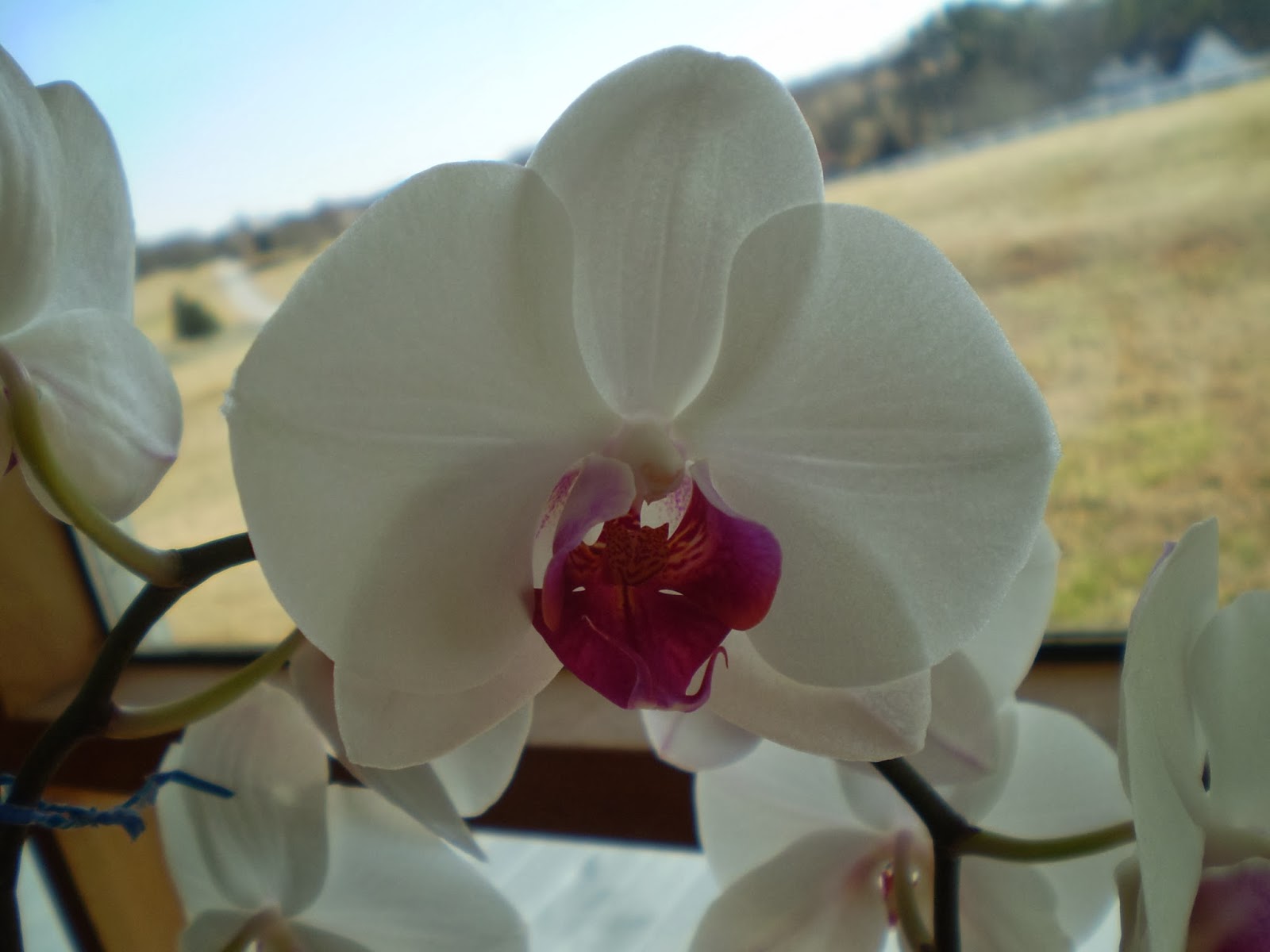 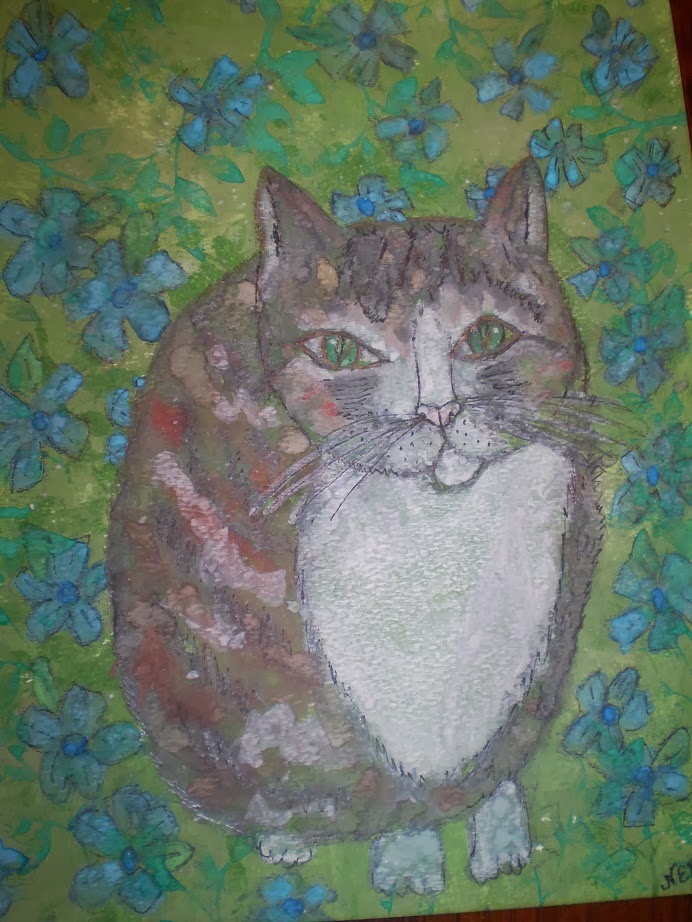 Mix It Monthly's theme for this month's art is pets. I have 3 cats, a dog, 2 horses and a goat. I took pictures of all of the inside pets and I liked the one of this cat best because her coloring suited the colors that Conny wanted us to use. This cat's name is Target because that is where I found her. Most of my pets are foundlings. Target was only 3 pounds when I found her and she was very hungry. She is still loves to be outside and I thought that she would look perfect in a garden setting. The background started out with a gelli plate background with leaves but I covered most of that up when I did watercolored over the background. I went back in with a stamp and did some more leaves mixed in with the flowers. Below the drawing is the photo that I took of Target. You cannot tell in the photo but Target is a Calico. I tried to put her pretty jewel colors in the painting even though you cannot see them well in the photo.


I got another photo op this morning and now you can see her pretty colors with this photo! 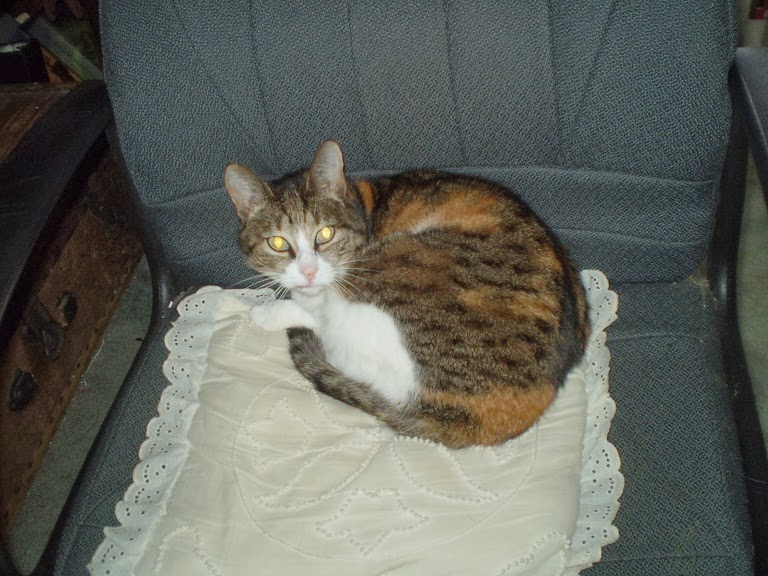 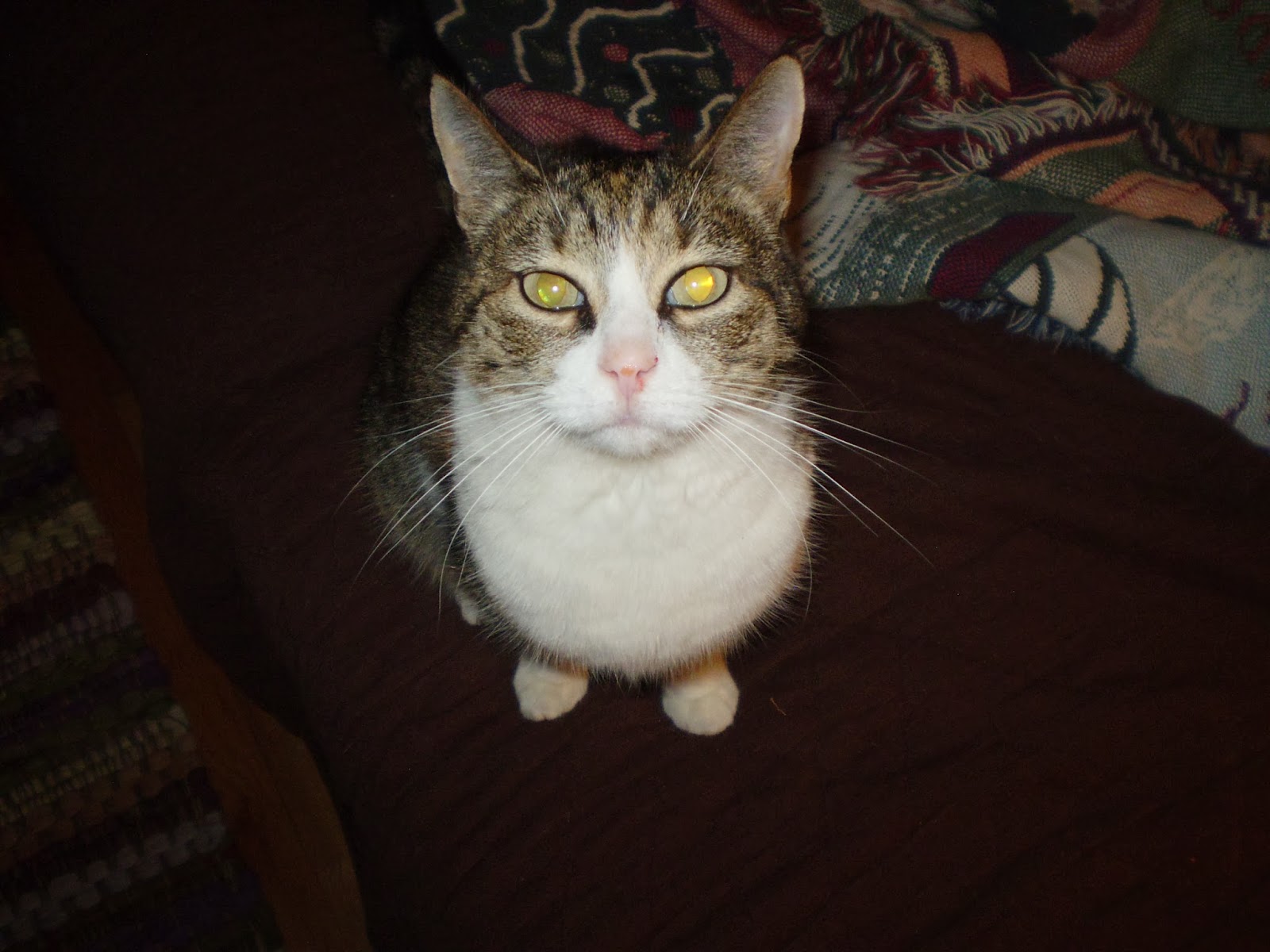